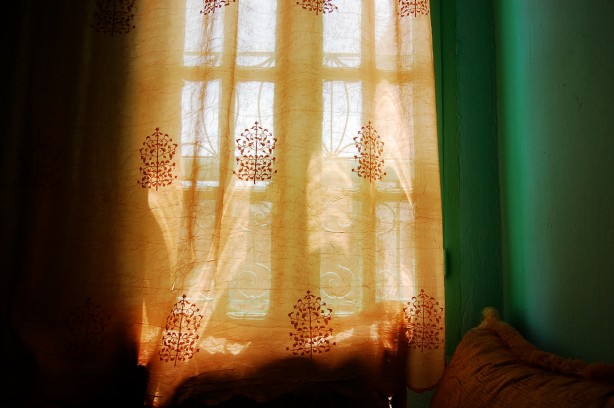 Insh’Allah, Moroccan Stories
(Insh’Allah means God willing. It is said by all Moroccans repeatedly in conversations. Particularly used when making arrangements to so something in the future. It is a gesture towards the power of Allah overseeing individuals’ daily lives.)

Subject and methodology/approach
I went to Morocco having tentatively set up some shoots with a group of young
Muslim Moroccan men (in their mid 20’s). I wasn’t exactly sure which locations I was going to shoot in but had plans to photograph in their houses and possibly their work places or where they hung out/spent time. My initial idea for the photo essay was to produce a piece of work which penetrated beneath the surface of Morocco and engaged with the culture, people and country. I suppose I wanted to come back with something that no one had seen before, avoiding the usual visual stereotypes (which are actually difficult to avoid when you are in such a picturesque country with such amazing natural light). In focusing on the ‘ordinary person’, I would attempt to make captivating images which communicated with the audience and portrayed something remarkable and memorable. I planned to present my 3 subjects with a series of questions designed to help me understand them more and record their answers whilst photographing these interactions between us. The questions would relate to their culture, religion, country, and outlook on life amongst other topics which would occur naturally in the conversation. I was influenced by Broomberg and Chanarin’s Ghetto project where they asked a series of set questions to different people from a variety of ‘Ghettos’. I knew my images would depend on what I found out during my sessions with each of my subjects.

Aims, objectives, concept
Part I: In the beginning…

What I was trying to do initially with my Morocco work was to start to create an ‘archive’ (I am not sure that is the right word now) as a response to cultural stereotypes and the suppression of difference. My archive would start off with an examination of 3 individuals I would talk to, interview and photograph. I would collect what I saw and heard then re-represent my findings in a format which expressed them. I felt that there was both a conceptual and journalistic potential to my idea. My strategy was to gather as much information as possible and shoot in a variety of situations. One of my interests lies in exploring the ‘language’ of documentary photography and how as a photographer I can adapt/invent/use a visual approach where various ‘types’ of shots (portraits, still life, environments) are used as well as to record interviews and interweave these in the final work. Attempting to break stereotypes of culture and national identity I didn’t want to make ‘point’ pictures but wanted the set to have a cohesive vision.
My subjects would be asked to respond to the following questions:
Are you a Moroccan first or a Muslim?
Where in the world would you like to go to and why?
What are the pressures you feel from your society?
What ideologies do foreigners have about Moroccans? Are these wrong?
What ideologies do you have about foreigners?
Which traditions do you adopt from Moroccan culture and from Islam?
What are your ambitions?
Focusing on 3 ‘ordinary people’ I intended to make captivating, remarkable and memorable images, aiming to portray ordinary life in an extraordinary way. One of my key interests lies in exploring issues surrounding cultural diversity and representation.

Part II: On the road…

I began to respond conceptually to my own brief. During shoots I focused my attention on responding in unobvious ways to the environment and subjects within it. Predominantly I was doing this through extreme cropping and framing. Decisions I made around what to include in the frame were as important as what I would exclude as was the juxtaposition of each of the elements within the frame. The phrase ‘I am at war with the obvious’ comes to mind (Eggleston). I didn’t want to fall back on the idea of having to place the subject/object in the centre of the frame for example- that would only contribute to the stereotypes I was trying to displace since this is an obvious and accepted way to present a subject/object. However, I did shoot some more conventionally framed shots as felt these might work to juxtapose the majority of what I was shooting depending on how I use them in the final piece.

Moving on from this I want to make the point that the stereotype is a pointless and ultimately useless representation of someone if the aim is to understand him or her better. Instead I would argue that individuals have multiple, even fragmented identities. Visually I have attempted to mirror these notions of fragmentation to produce ambiguous, arresting images whilst simultaneously I will juxtapose the visual with the verbal. Verbally my subjects discussed the complexities of belonging to a culture and religion. Their responses to my questions highlight the ambiguities of trying to surmise ones cultural identity and reveal the disparities between how people feel and how others perceive them to be.

I amassed a lot of images and sound. One avenue I pursued was to create a conceptual piece presenting images of the fragmented, multifarious individuals with voice-overs as a multi media piece. I explored a range of media in an attempt to produce new and original work.

After producing several versions of a multimedia piece (applying this concept) I decided that this wasn’t the way the project was leading so left this for the moment.

I began to work seriously on book layouts. Allowing these images the white spaces of a page allows me to make connections between various sets of images and also conveys a sense of the fragmented narrative which is exactly what the conceptual idea of this piece is about. Also, I could use different layouts to make a comment on the imagery so that more traditionally framed images would sit centrally within the page whereas unconventional shots would have an unconventional layout. This would create a tension between the expected and the unexpected.

The text adds a parallel narrative allowing the subjects voices to interweave within the physical spaces they inhabit.